An artesian well in the middle of town, gushing cold, clean, abundant water.

Rows upon rows of quaint, sturdy houses with manicured lawns and picket fences.

Blocks of booming businesses connected to the larger cities by railroad and, just beyond the city limits, hundreds of miles of rich farmland just waiting to be plowed.

Even the name of the town–Boise City–spoke elegance, le bois being the French word for “trees” or “woods.”

This was the dream peddled by J.E. Stanley and A.J. Kline of the Southwestern Immigration and Development Company in 1908. At forty-five dollars a piece, Stanley and Kline sold over 3,000 lots–sight unseen–to hopeful homesteaders in the newly acquired piece of Oklahoma Territory, a strip of land thirty-four miles wide and one hundred and sixty-eight miles long separating Kansas, Texas, Colorado, and New Mexico. Some called it “The Panhandle” because of it’s shape.

It also had another, more appropriate nickname: “No Man’s Land.”

Because when the eager buyers arrived to collect on their purchases, that’s exactly what they found. No people. No houses. No businesses, fountains, or railroad tracks. Just a barren, windswept prairie in the middle of nowhere. And the trees? Nothing but a few scraggly trunks of mesquite and cottonwood.

The entire town had been a hoax.

In fact, Stanley and Kline didn’t even own the title to the land they had sold. Their ambitions overriding their intelligence (and morality), the two were soon arrested for fraud and sent to Leavenworth Federal Penitentiary in Kansas.

And that was the end of Boise City, Oklahoma.

Or, it should have been.

Surprisingly, the town that wasn’t somehow began to take shape. Homes were built. Businesses were established. Trees were planted and wells were dug. Whether through grit, stubbornness, or simply a lack of options, Boise City grew and eventually became incorporated in 1925. That same determined spirit soon led to the attempted cultivation of 32 million acres of prairie land, ripping out the native grasses and leaving the top soil vulnerable to wind. 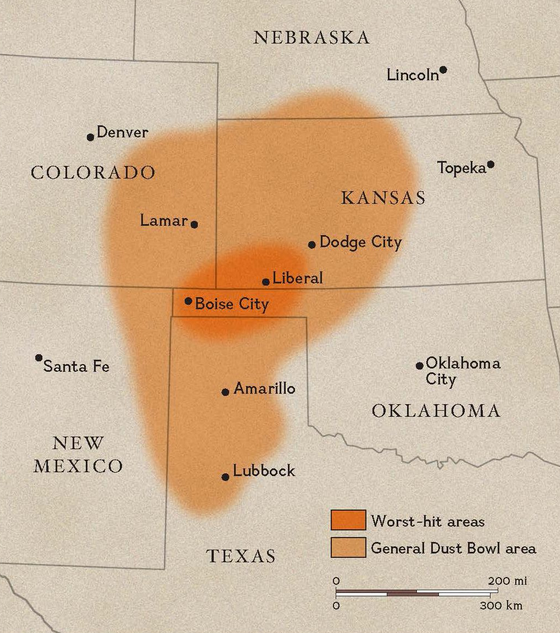 In the 1930s, Boise City became Ground Zero for the Dust Bowl, a period of severe dust storms and drought lasting for nearly a decade. The storms ravaged people’s crops, thrusting hundreds of thousands into poverty, and even created a new plague of illness, referred to by locals as “dust pneumonia.” During this time, a mass exodus of people from Kansas, the Texas Panhandle, far southeastern Colorado, and Oklahoma flooded the nation’s roadways. Because Oklahoma was at the forefront of the disaster, migrants were often referred to as “Okies,” no matter what their state of origin. All in all, over 3.5 million people moved out of the Plains states during this time.

Once again, this was the end of Boise City.

Or, once again, it should have been.

Against all odds, Boise City only lost ten percent of its population during the Dust Bowl. The same pluck and tenacity that drove its inhabitants to build a city out of nothing despite the sting of deception drove them to dig in and wait out the worst natural disaster the country had ever seen. People got by on what they could, however they could, helping their neighbors, stretching their resources, and praying for rain.

Today, the dusters are gone. The economy has its highs and lows, and drought will always be an issue for this narrow strip of land. But Boise City is still there.

The seat of modern day Cimarron County, it’s home to about 2,000 people, many of them descendants of those original steely settlers. From its beginnings as a city of fraud to its unfortunate designation as the “heart of the Dust Bowl” and, even now, to its current struggles reminiscent of many small towns in America, Boise City remains the town that never really was…and yet, somehow, still is.

One thought on “Boise City: The Town That Wasn’t…Then Was”