By 1935, the Plains were in shambles. The crops were withering, the dust was swirling, and the drought showed no signs of slowing. Thousands of people were suffering in poverty, dying from from too much dust or not enough food. The war with Mother Nature was inherently lopsided, and the residents of the Dust Bowl were losing battles daily, with no end in sight.

But in Washington, D.C., far removed from the dust and drought, a different kind of battle was brewing. President Roosevelt’s New Deal programs, which offered government assistance to those affected by hardships, were under increasing scrutiny from Congress and the American public. Opponents called the programs un-American, a direct affront to the ideal of self-sufficiency and limited government. It was not the government’s place, they reasoned, to provide “excessive amounts of money” and bail people out from their own poor choices or bad luck. And besides, this “Dust Bowl” couldn’t really be as bad as they were saying it was, could it? How could dirt possibly kill someone?

With election season looming, it looked as if Roosevelt’s New Deal–and his presidency–was on the line.

Enter Roy Emerson Stryker, head of the Information Division of the Farm Security Administration and amateur photographer. He reasoned that if the FSA were to send photographers into the heart of the Dust Bowl, Americans would see just how important Roosevelt’s programs truly were. Newsmen had merely aimed their cameras at the sky, capturing the spectacular and horrifying weather phenomenon. Stryker wanted his photographers to look at the people. Perhaps, if those out east could see their tax dollars at work in the faces of every day Americans like themselves, they would be more inclined to support New Deal programs (and keep Roosevelt in office).

It was a good plan. A solid plan backed by Roosevelt himself.

But when Strkyer’s photographers returned from their assignment, he realized they had captured much more than propaganda. They had captured images of a landscape–and a people–on the brink. 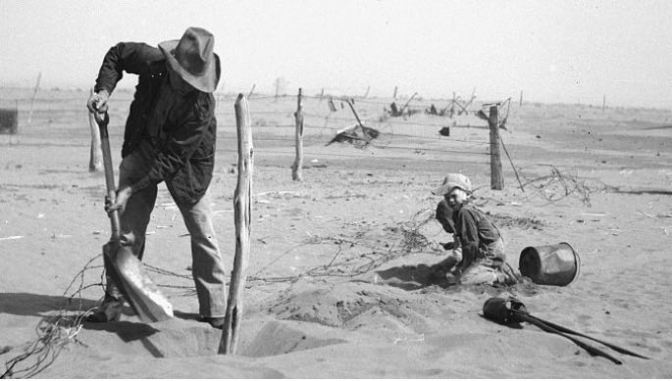 Rather than being a showcase of Roosevelt’s success, the photographs revealed the true struggle of the Plains–and just how little the “excessive” government programs were doing to help. Dirty faces, starving children, miles of wasteland…every picture told a story of devastation despite the thousands of government dollars thrown their way. In short, Stryker’s propaganda machine failed miserably.

But while the pictures didn’t provide the proof of success the FSA was hoping for, they did have another unintended result: empathy.

For the first time, those far-removed from the plight of farmers were able to see the hardship in their daily lives. Yes, the dirt really was covering houses and seeping into people’s lungs. People really were having to dig through sand to find their cars, their crops, and their cattle. Thousands were homeless, living in tents with barely enough to eat. The dirt on their faces and defeat in their eyes haunted the public. Words in the newspaper had fallen on deaf ears, but these photographs from people like Dorothea Lange and Arthur Rothstein could not be ignored.

Rather than highlight its failures, the pictures buoyed public support for New Deal programs. Roosevelt won the 1938 election and expanded assistance, sending thousands of dollars in support money to the Dust Bowl area. And while money couldn’t end the drought, it could provide much-needed to relief to starving farmers and, through the FSA, begin the process of reclaiming the Plains from the plow.

Today, thanks to the iconic work of Roy Stryker and his team of photographers, a new generation of Americans is able to experience the reality of life in Dust Bowl. They continue to remind us of the power of nature and our responsibility to ensure the mistakes and tragedies of the 1930’s never happens again.

Release Date for If It Rains