It’s an image as synonymous with the Dirty Thirties as dust: the hobo. Hopping the rails, scrounging for food, lounging on street corners with a tin cup or brown paper bag on their laps. In our minds, they are bedraggled, faces covered with stubble, carrying all their belongings in a handkerchief tied to a stick, men to be pitied or, in some cases, feared.

This image, however, stems more from cartoons than actual fact.

The notion of a hobo started after the Civil War, when soldiers from both sides of the conflict began to return home. In fact, the term “hobo” is thought to have originated from words “homeward bound.” These soldiers, finding their homes destroyed and jobs in scant supply, began instead to wander the countryside, looking for work.

The goal was simple: find something, anything, to put food in their stomachs and a roof over their heads, no matter how temporary. But as the eastern United States was preoccupied with figuring out how to exist again as one country, these men turned their attention westward, where the Transcontinental Railroad was just beginning its expansion into the new American frontier.

Hobos found their calling–and their reputation–along the newly built rail lines, many of which were laid by their hands. They found work in the towns that popped up along the way, building sewers and water lines, roads and bridges, homes and schools. They also found seasonal jobs on the farms that suddenly dotted the countryside.

These were the first migrant laborers, a necessary and driving force in the settlement of the American West, doing the jobs that needed to be done, no matter how hard, how tiring, how under-appreciated. Whatever our misconstrued view of them today, they were not vagrants or bums; these men wanted to work and actively sought it wherever they went. In fact, their contribution to the local economy was so vital, that many businesses welcomed them readily, none more so than the railroad, which turned a blind eye to their obvious (and technically illegal) preferred method of travel by hopping train cars.

Many people chose the life of a hobo, not out of necessity, but because of the relative freedom it offered compared to other ways of living. Traveling, working outside, setting limits on the location and type of work as dictated by whim or fancy (or merely the contents of your pocket) appealed to many. Well-known names such as Woody Guthrie, Jack London, and Ernest Hemingway spent time as hobos. In fact, the notion of a hobo became such an established and popular way of life that many began to unionize, forming groups called “tourist unions,” which met regularly, charged dues (a nickel per year), and adhered to a strict code of ethics. The first law? “Decide your own life. Don’t let another person run or rule you.”

Other hobo laws were more serious and included strict rules against greediness, dishonesty, and drunkenness. They set standards for cleanliness and behavior and stipulated the need to always be looking for work, a matter of pride separating the hobos from other drifters. The law also governed the so-called “jungles,” camps of hobos often found just outside railyards. Every hobo was expected to contribute the well-being of the camp and its inhabitants, whether it be in terms of food, firewood, or job leads. All of these rules were created with the goal of maintaining an air of respectability and fostering good relationships with the police and other members of the community.

Hobos had their own newspaper, the “Hobo News,” which served as a trade publication in which to find information on jobs, tips on living the hobo life, as well as personal essays from fellow hobos. Because many hobos couldn’t read, however, the groups created their own system of symbols to convey information to their fellow travelers. 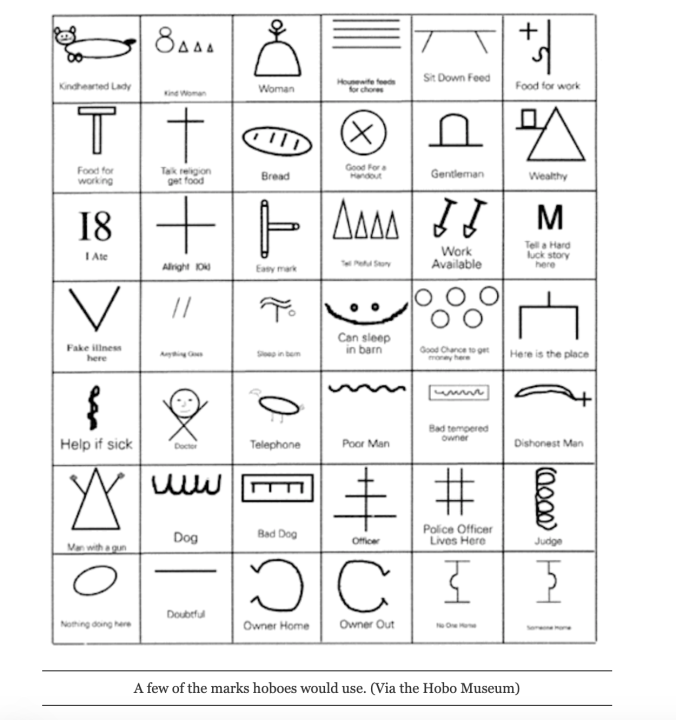 These symbols would could be found on fence posts, bridges, town signs, and farms to communicate with other hobos passing through. In addition to symbols, they also had their own language; many slang words still in use today came from hobos, such as “main drag,” “cup of Joe,” and “crummy” (which initially referred to an infestation of lice).

Yes, life for the hobo, while perhaps not for everyone, was progressing and solidifying as a normal and, in some areas, prevailing way of life.

And then the Depression hit.

Or, rather, a series of depressions, the largest of course being the Great Depression of the 1930’s. The economic collapse led to an influx of hobos into communities that simply no longer possessed the work to sustain them. Railroads, suddenly concerned about the lack of profits from non-paying riders, cracked down on car hopping with their own police force, called train bulls, who often used violence as a way to enforce this new, strict “no free rides” policy. With no jobs to find and no means to travel, many hobos turned from their profession, becoming instead the thing they always swore they wouldn’t : beggars and vagrants. Crime rose among hobo groups, creating an air of dis-trust and dis-ease within both the hobo community itself and the community in which they lived. Hobos became despised and vilified and were often beaten and chased out of town.

The heyday of the hobo was over.

The United States eventually rebounded from the Great Depression, the start of World War II bringing work to thousands, whether it be in the military or in factories. The memory of the hobo way of life faded for most, the remnants becoming caricatures in popular stories and art. But the legacy of the hobo still remains; one need only head west, to the towns and road built by the hands of men willing to roam…and willing to work.