Palm Sunday. The start of the holiest week of the year for Christians in Boise City, Oklahoma and all around the world. Dresses and suits were pulled from the closet and wiped free of dust, although years of drought and poverty had left most with frayed cuffs and thin fabric. But it was important to go regardless of appearance. It was a special day, after all. A day ripe for a miracle. A day that maybe, just maybe, God would finally answer their prayer. The same prayer pleaded from the pews and shouted in the fields. The prayer they had lifted up for months on end.

The prayer for rain.

And why shouldn’t they believe today was the day? For the first time in months, the wind had stopped. The skies were clear, the dust finally losing steam and settling on the ground. The sun had at long last shaken its haze. The grass was still brown and scorched, but the brilliant blue of the heavens provided much-needed hope of a renewal on the horizon.

Maybe Mother Nature had turned a corner. It sure seemed that way. After being stuck inside for weeks as duster after duster ravaged their town, people opened their windows. They strolled through town. They gathered outside after church for a Sunday afternoon picnic lunch.

It was a spring the way spring used to be.

Until, suddenly, the horizon began to darken. 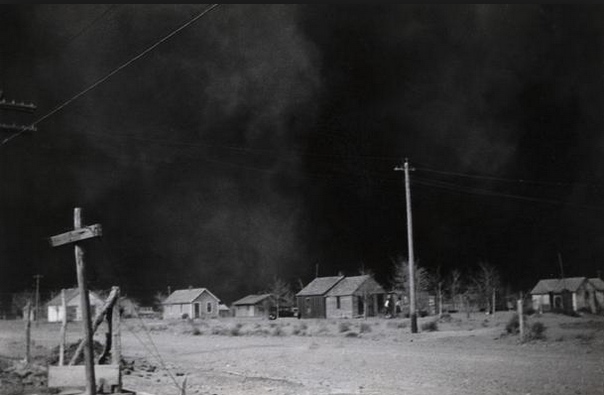 Just after five o’clock in the evening, a monster dust storm rolled in from the north. Black as the North Dakota soil from where it started, the duster barrelled south along a cold front boundary, picking up intensity (and more dust) as it moved along the drought-stricken areas of Kansas, Oklahoma, and Texas. At its peak, the storm was over two hundred miles wide and a thousand feet high, with winds as loud as a freight train screaming at almost a hundred miles an hour. Some witnesses described it as a massive tidal wave or a wall of moving dirt. Others simply saw it as monster. An answer to their prayers in a way–not salvation, but armageddon.

The duster of Black Sunday–as it became known–lasted for hours and turned the once-sunny day into night. People huddled in basements, barns, and tornado shelters, unsure what was happening. They’d survived dusters before, yes, but this? This wasn’t a duster. This was the end of the world.

Many were trapped in their cars, the static from the storm having shorted out their engines, as the winds threatened to overturn their cars and the dust around them piled high enough to bury them alive. But the unluckiest were trapped in the open, unable to find shelter as the black blizzard approached. Blinded, disoriented, and unable to breathe, many were not found until weeks later–suffocated and entombed by dirt.

By the time the storm exhausted its rampage, it had crossed five states and displaced an estimated 300,000 tons of topsoil, some of which traveled all the way to the east coast. The static electricity generated during its run was enough to power New York City, a feat that had never been achieved before or since. In a decade filled with catastrophic dust storms, Black Sunday stands out as the single most destructive duster to hit the Plains states.

And while the magnitude of the disaster finally spurred Congress into action, taking legislative steps to improve quality of life of those affected by drought and incentivizing certain agricultural practices in an effort to restore the land, for many, Black Sunday was the beginning of the end. It was the nail in the coffin of a failed homesteading experiment, a sign from God to abandon this shriveled and cruel piece of land. Thousands joined the exodus already in process, packing what little they could salvage and heading west.

For those who stayed, the drought and the dusters would continue for several more years before any measure of relief returned to the Plains. Although the severity of Black Sunday was never to be repeated during the 1930s, it remains a stark reminder of the power of nature and the illusion of sovereignty over the natural world around us.

**This is the second part of a History Friday series of articles on the Dust Bowl. Past articles can be found here.**

Release Date for If It Rains